The Scandinavian myths are featured with especially turbulent stories which have recently become widely loved by film producers looking for dynamic and unique plots. The developers of video games including the companies specialising in gambling software have also got interested in the topic of the epic events of the Scandinavian legends. One of the best examples is the Asgardian Stones video slot created by NetEnt in 2018. The game is available for playing free of charge with a demonstrative mode on our website. 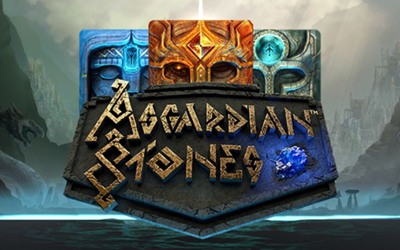 The features of Asgardian Stones

The Asgardian Stones online slot is dedicated not only to the fantastic battles between gods but also to the constant fighting between ancient people and the severe weather of the northern world. Since you get right in the middle of these dramatic events, you will witness an entire avalanche of the Asgardian stones some of which have hidden treasures.

The Asgardian Stones slot has five reels and three lines of symbols which offer twenty paylines. The maximum winning one can get on this game is 200 000.

Asgardian Stones has eight basic symbols using the images of the stones presenting the Scandinavian gods. You will find here grey, violet, blue, green and yellow god images. The maximum prizes offered by the winning combinations of these symbols is 500 coins. The other basic symbols are the card Queen, King and Ace which offer up to 30 coins.

The special symbols of the game are its Wild symbol and the Bonus Wheel symbol.

The bonus of Asgardian Stones 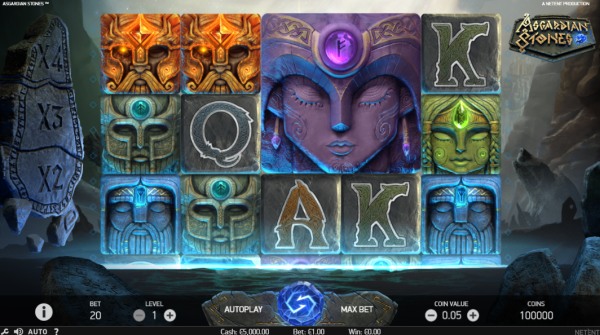 There are several bonus features available on Asgardian Stones. First of all, it is a possibility of getting colossal versions of the basic slot’s symbols. These can cover from four positions to six ones at a time. The colossal symbols are offered by the game during its bonus Avalanche round.

Second of all, the game has its Wild symbol which can also occur in the form of a colossal stone with the letter W on it.

Finally, a really unique feature of Asgardian Stones is its Bonus Wheel symbol which is a block of symbols covering nine positions on the screen. The Bonus Wheel spinning can give you free spins or extra money.

How to play Asgardian Stones slot

The Asgardian Stones online slot is played just like any other game of this sort despite its unparalleled design and appearance. You won’t need to do anything special in order to play the game successfully as its outcome depends entirely on your luck.

What you have to do is choosing the bet level and the value of a coin before you start spinning the slot since these values influence the amount of your bets. This can be done easily with special bottoms available on the slot’s screen. Note the fact the developers of the game included an extended range of bet values starting from 0,20 coins up to 200 coins.

If you prefer playing online slots on the go, feel free to launch the mobile version of the game with your favourite Internet browser, no matter whether you are using a tablet computer or a smartphone.

Asgardian Stones is a unique online slot not only because of its exclusive bonuses, but also because of its excellent graphics and special effects which will give you real aesthetic satisfaction apart from unbelievably huge money prizes. Indeed, this video slot is so bewitching, it is really hard to ignore the temptation to play it!