Return to your childhood while playing an amazing and funny Big Bad Wolf slot for free! The demo version of the game offering you free play is available in the casinos shown on our list. Note, you can play there with real money and grab massive winnings as well! 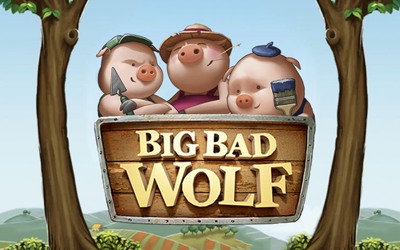 Beyond a shadow of a doubt, you will hardly meet a person who doesn’t know a famous tale about three pigs. This story that is so loved by millions of people of different generations around the world is a folk tale and it is widely known as The Three Little Pigs. Today, you can find various versions of this story including the English variation which is not only educational teaching us to about the importance of being industrious but is also scary since the little pigs of this story finally eat the big bad wolf. Yet, if you look at the Big Bad Wolf slot of the Quickspin game studio, you will find an absolutely different version of this popular tale that is amusing and hilarious.

Although the theme of the Quickspin’s Big Bad Wolf video slot won’t surprise anyone because of its immense popularity, it will still astonish you with its unparalleled graphics. Actually, the way the team of the Quickspin game studio have designed its video slot machine is absolutely unique.

Everything is happening in the house of the three little pigs. The house they built so diligently is the place where the reels and playlines of the slot are located. Despite this fact, you won’t see the reels as the designers of the slot decided to create an unusual type of animation. Thus, the spins of the slot will make the wooden boxes fall out on the floor of the pigs’ house. Not only do these boxes contain the necessary things of the three little pigs, but they also have the slot’s symbols. Therefore, on this game, you will need to collect the winning combinations of such wooden boxes. 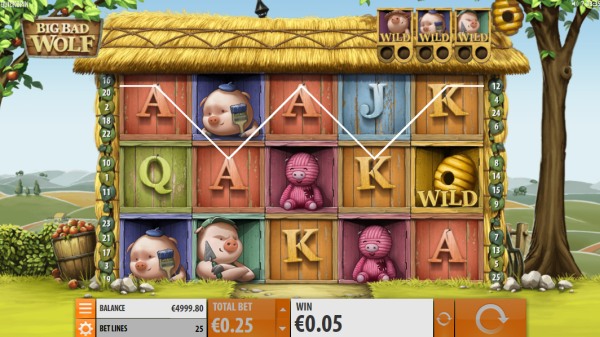 Some of the symbols used on the Big Bad Wolf slot are the pictures of the three little pigs, a soft toy of a piglet, the moon, a beehive and, of course, Big Bad Wolf.

Undeniably, if you have read the tale of the three little pigs, you definitely know there had been two unsuccessful attempts of building a stable house of the two pigs and it was the third brother who managed two create the house able to withstand the attacks of the wolf. Certainly, the creators of the Big Bad Wolf video slot included all of the three construction into the gameplay of their slot. Thus, starting the game, you are invited into the house of the first pig. The house is made from straw. While the boxes with the slot’s symbols are changing, you will see the pig inside the house where a stove and a hammock are located. Although the scenery around this house is especially bucolique countryside, the house itself is not steady. That is why the wolf can ruin the house easily. When the night comes, the wolf starts its hunting and easily blows away the straw house. The animation of this action starts a series of free spins and leads to the houses of the two other pigs.

A huge advantage of this video slot is also its pleasant and cheerful music that helps to relax and win even more cash.

The Big Bad Wolf video slot can be played in an extremely simple way. Use the Total bet button for setting the amount of money you would like to wager. You won’t need to set the number of the active playlines since this number is predefined by the developer. There are 25 playlines and all of them are already active.

Once you decide how much money you are ready to use for playing the slot, it’s time to make your first spin. For this purpose, you can use either a button looking like a white arrow which was designed for starting pins manually, or the Autoplay button that launching spins automatically.

If you have any questions on the rules of the game or the payout ratio of each possible slot’s winning combination, press the Paytable button. This will open the guide including any essential piece of information on the Big Bad Wolf’s gameplay. Although you can find the information on possible winnings on your own, we will provide you with some basic facts about the value of the slot’s symbols.

Despite the fact the tale on the three little pigs doesn’t tell us whether the pigs were into playing cards or not, the developers of the Quickspin game studio decided it would be appropriate to include the traditional card symbols as the symbols of the lowest value to the game. Therefore, you will certainly find the cards of Ten, Jack, Queen, King and Ace that will add between five and hundred coins to your balance.

We have already mentioned the pictures of three pigs as well as the picture of a soft toy of a piglet are used as the slot’s symbols. All of them have the same value adding 15, 50, 100, 150, 200, 150 or 300 coins for collecting a winning combination.

The designers of the Big Bad Wolf slot added a wild symbol to the game in order to make it more rewarding. The wild symbol of the game is a picture of a hive. If you collect a winning combination consisting of the wild symbols, you will be able to earn up to a thousand of coins. Furthermore, you will be able to benefit from a unique feature of such a symbol that is the ability of transferring any symbol that is not a scatter one into a symbol that a winning combination is lacking. This way, you have already understood the slot also has a scatter symbol. This symbol uses the picture of the wolf and it is capable of turning on the round of free spins.

The features of Big Bad Wolf 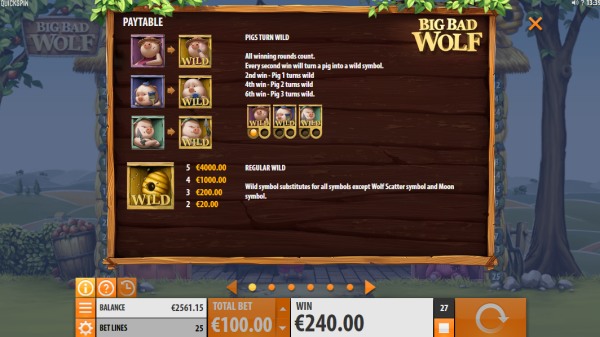 The Big Bad Wolf video slot is an online game offering five reels and twenty-five ever active playlines. As you have already learnt from the previous parts of the game’s review, this slot includes various useful features such as the Autoplay mode, the possibility of making free spins as well as the wild and scatter symbols. Don’t forget the Big Bad Wolf is a slot allowing to win a jackpot.

The experts of the gambling market who have tested the slot in a professional way emphasise the fact this game gives you an opportunity to receive one of its best bonuses with only one spin which is a rather rare behavior among other video slot machines. That is partially the effect made by a high payout ratio of the slot that is equal to 97,25%. This game is particularly good for playing with your real money rather than bonus funds under the condition of applying the strategy of progressive wagers.

The Big Bad Wolf video slot is particularly profitable due to its multiple bonuses that can be launched right from the first spin you make. The first bonus option is Swooping Reels. Once there is a winning combination on the screen swoop launching the occurrence of the next boxes with the slot’s symbols. In such a way, you will be able to increase your winnings as more winning combinations can be created.

The next bonus option is connected with the wild symbol. Although you have already learnt about the features of this symbol, you still don’t know about its secret functions. In point of fact, there are small windows under the pictures of the pigs that can be seen on the main screen. Every new winning of yours will make these windows active and turn the symbols into the wild ones. In such a way, winning six spins in a row will give you three additional wild symbols.

We have already mentioned the way in which the straw house is ruined. Speaking precisely, having at least three scatter symbols will pay you general bets (the number of bets is equal to the number of the scatter symbols you get). Once the money is added to your balance, you will see the wolf blowing the straw house away and chase the pig. This animation starts the round of ten free spins. While playing the Free Spins mode wait for the occurrence of the moon, as it will also bring you extra bounties. The moon symbol activates one of the windows and gives you bonuses. Collect three moons and you will get two free spins. Meanwhile, the house of the second pig will also be blown away.

Playing with the third pig will also be rewarded in a special way under the condition of collecting three moons. This time you will be able to play two free spins with a doubling multiplier.

The end of the Quickspin’s story is quite unusual as it reveals the fact the wolf managed to blow away even the stone house. The wolf is now preparing for meal whereas the pigs are running away.

The value of a coin on the slot varies between 0.01 USD and 5 USD. Thus, the minimum bet you can make is 0.25 USD whereas the maximum amount of your wagers can be equal to 125 USD.

The maximum winning on this slot is multiplied by 1000. It is possible providing you collect five Wild symbols.

The payout ratio the developer of the slot offers is 97.29. Undeniably, this makes the slot particularly profitable.

Feel free to play the Big Bad Wolf completely free of charge. This game is offered on various – devices including portable devices and desktop computers. No matter whether you are using a computer with one of the versions of the Windows operating system or you are going to play the games on your Android powered table computer. The Big Bad Wolf slot created by Quickspin is perfect for playing it virtually anywhere you wish.

Note this slot is available in the demonstrative mode, so you can play the game free of charge.

Quickspin is one of the top modern gambling studios specializing in creating state-of-the-art games of the highest quality. Quickpin is rapidly making its progress giving the online casino enthusiasts absolutely unique video slots that have exclusive plots and sophisticated graphics, as well as extremely profitable inbuilt bonuses. The company has already created an umpteen of unparalleled video slot machines that have gained millions of fans.

Big Bad Wolf is one of the most highly favoured Quickspin’s video slot that has been designed with a particularly creative approach despite the fact the plot of the game is well-known to virtually any person. This creative approach is the feature of Quickspin its devotees value the most.

The Quickspin’s Big Bad Wolf video slot is constantly attracting more and more players. As a result, the online casinos that provide their players with an opportunity for playing this game always have this slot under the categories of the most popular casino games as well as in the group of the recommended slots.

There is nothing surprising in it as the slot combines an exciting plot full of sophisticated animation, extremely plain and intuitive rules as well as particularly generous rewards. In addition to it, the game differs a lot from other slots even from the ones covering the same topic. Undeniably, Big Bad Wolf is worth playing not only with a free demo mode, but also with real money.