Fantastic adventures are waiting for you in the online casinos on our list which offer the Book of Dead slot which is one of the greatest slot games available on the market today! Try the demo version of the game on one of these websites or make your first real bet. 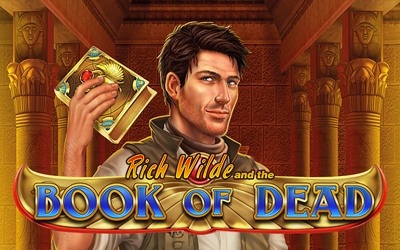 The Book of Dead or The Book of Ra are the titles we have nowadays due to Karl Richard Lepsius, the linguist who presented such a translation of the ancient Egyptian text originally called The Book of Emerging Forth into the Light or The Book of Coming Forth by Day. Anyway, right now the proper way of calling this artifact is not so crucial for us since we are more interested in playing the Book of Dead video slot developed by Play’n Go.

The Play’n Go game studio invites all the Internet users longing for life-changing adventures to join Rich Wilde who is a famous ambitious and somewhat desperate explorer searching for the fantastic treasures of ancient Egypt. The rumor has it these treasures are as huge as 250000 coins so the trip to Egypt with Rich Wild is definitely worth your time.

At first glance, one can see how much effort the artists of the Play’n Go game studio paid to creating the Book of Dead video slot. Apparently, every piece of the appearance of this game is full of sophistication and good style.

First of all, the fact Rich Wilde is a very realistic character of the game makes one feel the real spirit of companionship. The main scene of the game is also highly realistic. The entire process takes place in one of the halls of an ancient pyramid and the entire design of the scenery allows you to feel yourself an active participant of this great adventure. All the slot’s symbols are accurately created items related to the mysterious epoch of Egyptian pharaohs. Some of such symbols used by the artists of Play’n Go are the pictures of a scarab, pharaoh and phoenix. The style in which the artists created these beautiful images resembles of the ancient frescos. While you are wondering around a curious and enigmatic place, the reels of the slot will spin in order to open the mechanical and let you into the treasure house of the Egyptian pharaohs.

The magic aura of the game process is intensified with the help of a special soundtrack. The sounds of this music combined with the basic sounds imitating the work of a cash register machine make you relax and absorb you entirely.

Such symbols as Rich Wilde, the pharaoh as well as the ancient Egyptian gods that appear looking like a wolf and a falcon can bring you a sum of coins starting from 5 coins and ending with 5000 coins. One of the most important symbols used on this slot is, undeniably, a picture of Book of Dead. This symbol can act as both a Wild symbol and a Scatter. You will learn more about this symbol in the following sections of the review.

The developers of the slot made it possible for you to customise crucial game setting such as the value of a coin, the amount of coins used per playline as well as the level of your bet. All of these features can be set in a quick and convenient way right on the main screen of the video slot machine.

The features of Book of Dead

Book of Dead is one of the most mysterious and important ancient artifacts, therefore, it combines several features that can change a life of any player. The game has special Wild and Scatter symbols, as well as an Expanding one.

It has already been said in the previous section of the article that the game’s Wild and Scatter symbols are presented by the same picture that is a legendary Book of Dead.

The Wild symbol is a symbol that has a special power allowing it to turn into virtually any other symbols available on the game. Such a function of this symbol is particularly useful for the players of the slot since the Wild symbol can easily become a symbol that your winning combination is lacking. In such a way, the combination will be complete and a nice prize won’t omit you.

The bonus option available for the players of Book of Dead is a round of free spins that can increase your profits. The way in which you can launch the level of free spins as well as essential information on the Scatter and Expanding symbols are described in details in the next section of the review.

As we have already mentioned it, Book of Dead has a highly rewarding bonus that offers a set of free spins to the slot’s players. Certainly, the name of free spin means the spins that you do not have to pay for. Furthermore, when it comes to the free spins that are built-in on some video slot machines, you can relish a free game without a need of using the bonus spins offered by a casino as a part of a promotion. Book of Dead is one of such slots that means you can benefit from the free spins that are available in the game regardless of the current casino’s promotions.

In order to turn on the mode of the slot’s game with free spins, you should get at least three Book of Dead symbols on the screen as Book of Dead is the slot’s scatter symbol. It is pleasing to know the positions and combinations of these symbols actually do not matter. First, the game’s system will choose an additional bonus symbol called an Expending one that will have a quite peculiar feature. Every successful spin of the free game will increase an amount of the bonus symbols on the screen. If you are lucky enough while performing your free spins, you have all the chances of feeling almost an entire screen with the same symbols and, as a result, it is quite possible that you will grab the greatest winning of 250000 coins. Remember it is not impossible to achieve this goal since the developers of the Book of Dead slot made it possible for the players to launch more games with free spins under the condition of collecting at least three scatter symbols while playing a bonus game.

All in all, Book of Dead has five reels and ten playlines. You can choose a value of a coin of the range starting with 0.01 and ending with 2.00. It is allowed to set only one coin per line as a minimum amount and five coins as a maximum number at Book of Dead.

The video slot machine has very flexible settings for wagers. You can play the game with as small bets as 0.01 per wager o choose the greatest possible bets of 100.00.

Pay your attention to the payout ratio of this highly rewarding video slot that is 96.21%.

Due to the experts of Play’n Go, you can join Rich Wilde on his fantastic adventure anywhere you wish! All you need for this life-changing exploration is an electronic device and an access to the Internet. The game can be launched on your personal computer as well as the majority of the modern portable devices such as smartphones and table computers. No matter whether you use the Android OS or iOS, you will be able to run the game smoothly on your equipment. Even if you are worrying about the age of your device assuming it is too old for this sophisticated video slot, do not rush with conclusions and try to launch it directly via your Internet browser without downloading it and installing on your device. In all likelihood, you won’t experience any complications while playing the game!

Play’n Go is one of the most successful game studios specialising in gambling programmes and supplying the majority of the top online casinos. The company was established in 2005 and it is focused primarily on the creation of innovative and highly enjoyable video slot machines as well as the development of modern gambling platforms and special back-office tools that can be used by gambling websites. Any player who is seeking exclusive slot machines that really differ from the majority of the products available on the modern market, should pay her attention to the games created by Play’n Go and Book of Dead is one of the best choices to begin with.

Unforgettable adventures are waiting for your on the legendary Play’n Go studio’s slot of Book of Dead! Although the theme of the searches for one of the most famous Egyptian artifacts is especially loved by the professionals working for the business of entertainment including not only game developers but also film producers, the product of Play’n Go is absolutely unparalleled.

Help Rich Wilde to find Book of Dead that will allow you to enter the magnificent treasure house of Egyptian pharaohs. The developers of this video slot made their best to include extra features to the game that will provide you with multiple opportunities for generating huge winnings. The thrill and excitement as well as immense profits are guaranteed.