If you are a devotee of fantasy genre of films and books, you certainly know who Conan is. The character created by the American writer Robert Howard in the thirties of the previous century has still been the favourite one of many people around the world. The plot of the Conan’s story was used for the creation of the Conan slot by NetEnt which is available for playing for free with a demo mode on our website. 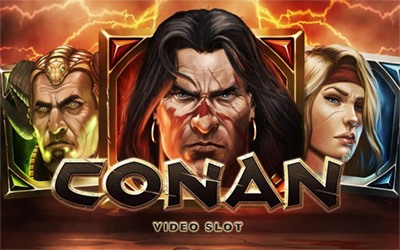 The features of Conan slot

The slot created by NetEnt has six reels and twenty four paylines as well as a great variety of bonus features making this game absolutely unique. The scene of the game takes place in Hyborian Age which is the time of the life of Conan according to its creator, Robert Howard. The reels of the slot are located in the village covered with snow where you will meet the main characters of the book as well as the objects used by Conan such as his helmet, his sword and other tools. In addition to it, you will find three types of coins while playing the game which have the images of a fenix, a cobra and lion.

The bonus of Conan slot 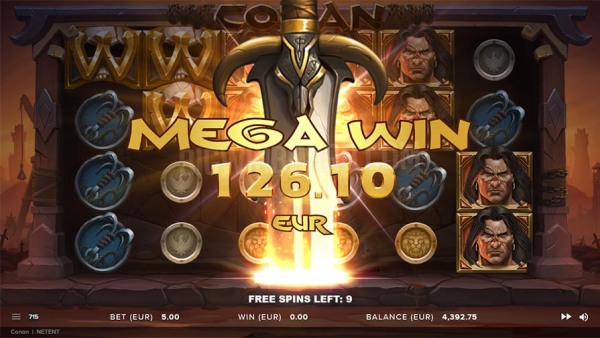 The Conan slot is an exclusive game not only because of the fact it has become a NetEnt’s version of a widely popular story of Conan, but also because of its multiple bonuses some of which make the game partly interactive.

Other special symbols of the game are a Scatter and a Mystery Symbol. While the function of Scatter is well-known to the real fans of online slots as it is launching the series of free spins, the Mystery Symbol is a unique feature of Conan. This picture is capable to transform into equal basic symbols generated randomly. This function is called Thoth-Amon. In addition to it, this symbol can add an extra multiplier to the game up to 7 times.

Furthermore, this game offers a unique possibility of playing with so-called linked reels which are featured with identical sets of symbols. Linked reels available during free spins can cause an entire screen being filled with the same symbols.

Finally, the game has three different types of free spins features with diverse volatility and active colums. Thus, you will have a chance to choose from City of Thieves Free Spins, Temple of the Serpent Free Spins and Walls of Tarantia Free Spins.

How to play Conan slot

Don’t be bewildered by the variety of options available to the players of Conan since the game is still a video slot which means your task is spinning the reels. Of course, the only thing you will need to do first is choosing your bet which can be as small as 0.20 EUR and as great as 200 EUR.

You can’t neglect the release of this fantastic video slot! Even if you are not into the fantasy stories or the Conan’s adventures in the first place, you will be able to participate in great adventures by playing this sophisticated and complex slot game offering huge winnings and exclusive bonuses!