Crime scene is an intriguing video slot created by NetEnt which is one of the most successful developers of gambling software today. Beyond a shadow of a doubt, the game is dedicated to all the lovers of mysteries, unsolved puzzles and unrevealed secrets. Still, the slot enthusiasts who are not particularly attracted by such a genre, will still enjoy the game due to its generous rewards. Try playing the Crime Scene slot’s demonstrative version free of charge on our website dedicated to online gambling! 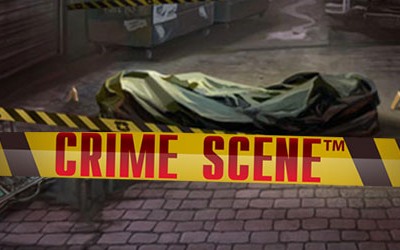 The features of Crime scene slot

Crime scene is based on five reels and provides its players with fifteen paylines. As you have already understood, the aim of the game is to explore the crime scene and the crime. You will need to be particularly attentive because it is you who will become the detective of this crime story. In order to make a right conclusion, you will need to collect evidence available on the reels of the slot.

The least paying-symbols of the video slot are presented by the card symbols designed by the artists of NetEnt as the sign written with chalk on the asphalt. Tens and jacks will pay you up to 30 coins, queens and kings can give you up to 40 coins whereas 50 coins can be gained by collecting a winning combination of aces.

Of course, these are only drawings on the earth and you will need to get really unambiguous evidence in order to understand the crime better. For example, finding a suitcase or a gun can add up to 200 coins to your account, glasses with a lamp can pay twice as much as the suitcase, whereas the most crucial item is a footprint giving up to 750 coins to a competent detective.

The bonus of Crime scene slot 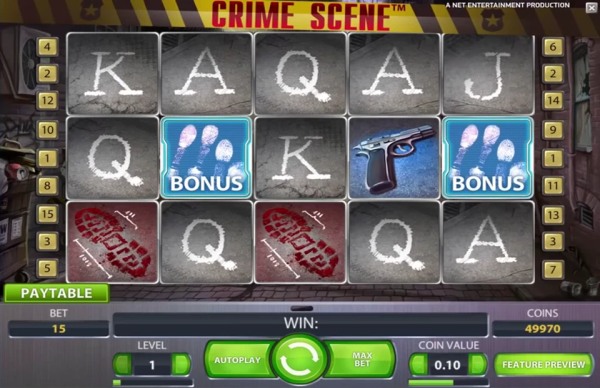 The game offers to its players a Wild symbol transforming the symbols into the ones needed for completing a winning combination as well as a Scatter symbol triggering the occurrence of bonus spins. Furthermore, Crime Scene offers its players a unique bonus game where you will be asked to choose one of the file folders with fingerprints. Undeniably, choosing the right one will give you especially valuable bonuses.

How to play Crime scene slot

Obviously, the bonus round of Crime scene can be called an interactive one. Here, your choice can change the outcome of the game. Still, the general gameplay is standard meaning you will need to push the Spin button or set the game to an autoplay mode. In addition to it, you will need to decide how much money you are going to bet while playing the slot.

Crime scene is one of the unique products developed by NetEnt dedicated to an extremely popular topic used in films and books and still, neglected by the majority of the game producers. Fortunately, now you can enjoy the process of solving mysteries and playing a video slot game at the same time. Don’t forget about the huge rewards waiting for you.