Many of us enjoy westerns. The culture of the Wild West Era attracts people with its special features creating a unique and somewhat exaggerated mixture of violence, anarchy and romance. If you are one of the devotees of the western genre, pay your attention to the continuation of the popular Dead or Alive slot created by NetEnt. The second part of the game, Dead or Alive 2 invites you to participate in new adventures of brave cowboys. Try this game free of charge by playing its demonstrative version on our website. 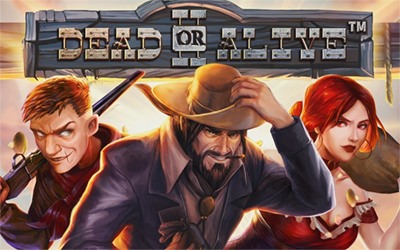 The features of Dead or Alive 2

First of all, the second version of the Dead or Alive slots strikes with its state-of-the-art graphics. While the first game used a cartoonish style in its visual appearance, this time the game is particularly realistic. Playing Dead or Alive 2, you will meet the worst bandits of that time on the five reels of the slot and get the stolen treasures while collecting the winning combinations of nine types.

The least paying symbols of the game are the card symbols such as tens, jacks, queens, kings and aces. The group of the objects used by cowboys offers greater prizes. Thus, the symbol with drinks will bring you up to 200 coins, a symbol with a cowboy’s boot will help you to earn up to 300 coins, the cowboy’s hats will add even 400 coins to your balance and a revolver will bring you up to 750 coins. The most valuable symbol of the Dead or Alive 2 slot is a sheriff’s badge worth even a thousand of coins.

The bonus of Dead or Alive 2 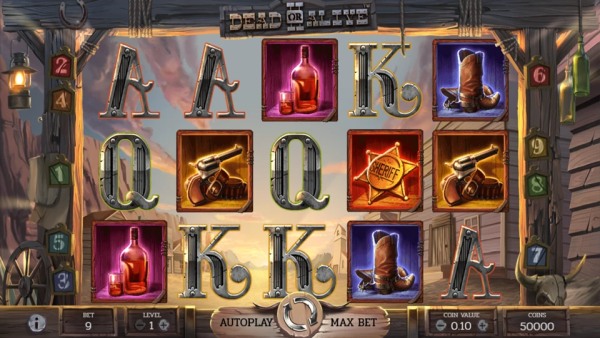 The second version of the Dead or Alive slots offers two special symbols such as a wild and a scatter as well as three bonus games. As you know, wilds are helpful when it comes to filling the winning combinations as such symbols can transform into the ones your combination lacks. The Dead or Alive 2 slot has unique Wild symbols as they will increase the multiplier and the number of free spins with each additional symbol. This feature was called by the game’s developers as Train Heist.

Furthermore, the wilds of this game can also launch the feature called Old Saloon. This is a series of free spins featured with a doubling multiplier and so-called sticky wilds or the wilds which remain in their positions after spinning.

How to play Dead or Alive 2 slot

The Dead or Alive 2 slot is as simple as the first game. Before you start making spins, you will need to make stakes. This can be done easily with special buttons for changing the bet level and the value of one coin. When you are ready, you will be able to set the game to the Autoplay mode or spin the reels by pushing a special button. Note there is also an opportunity for choosing the max bet which will help you to bring the greatest rewards of the slot machine.

Undeniably, Dead or Alive 2 from NetEnt studio is an impressive game with multiple bonus options. You will like this slot even if you are not a fan of westerns or the first game didn’t impress you. Dead or Alive 2 has several bonus variations each of which will make the process of playing especially rewarding. Additionally, the highest standards of graphics will allow you to get soaked in the unique atmosphere of Wild West.