The Dead or Alive slot machine is one of the most successful online games which is now available to the players for free. You will find the best online casinos to play the demo version of the game or try your luck with real cash on the casino ranking list below. 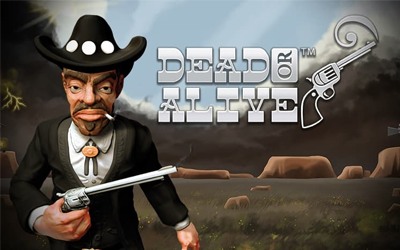 One of the favourite types of video slots that is chosen by many casino players is dedicated to various adventures. It isn’t strange since the majority of us are secretly dreaming about life-changing events that will turn our entire world upside down. Certainly, we always hope these changes will have positive outcome and we are also ready to participate in really risky ventures in order to get the results we wish. Still, the real life is seldom able to live up to such expectations, therefore, we are seeking adventures in books, films and computer games.

The Wild West adventures are particularly loved by millions of people. They are usually associated with high risks and dangerous situations. This is a perfect game for those players who wish to pluck up their courage and finally make something outstanding. The NetEnt’s video slot will give you such an opportunity, especially, if you are ready to make great wagers. Run a risk and you will see how much you can gain!

The team of the NetEnt’s designers have paid particular attention to the appearance of the Dead or Alive slot since it is an essential set of the slot’s features able to make a particular impression on the players. With a view to making your journey to the Wild West more realistic, a great many of related objects were added. Thus, here you will find slots symbols presented by the pictures of cowboy boots and a cowboy hat as well as a pair of revolvers, glasses of spirits, a sheriff’s star and many other things that will be definitely useful for anyone visiting the Wild West.

The entire style of the Dead or Alive slot is closely related to the world of brave cowboys. Each piece of this game has been created according to the slot’s theme. Therefore, the game process will take place in front of a wall full of holes made by shots. You will hear even more shots during the game as the sound of a shot is one of the most common sound used on the slot. Of course, even the toughest cowboy needs to have some rest, so you will be able to emerge into the atmosphere of a real saloon with its typical sounds of laughter, whooping, the music played on piano and, certainly, the sounds of clinking glasses.

Spinning is started with the use of a special button that turns into the stop button once you wish to turn off the spins.

The Dead or Alive video slot is a game that allows the players to set various parameters on their own. First of all, use the Bet Lines button for setting the number of active playlines. Second of all, choose the coin value with a special button. The Bet Level button can be used for choosing the level of your bets. Note there are four possible levels on the game.

Providing you need to learn more information on the game’s payout ratio, the meaning of each game symbol as well as the possible winning combinations, use a special button that is decorated with an iron sign. The bottom left part of the screen is earmarked for the buttons that are used for changing the game settings.

The goal of the Dead or Alive slot is collecting its symbols that will create winning combinations. Each possible combination has its own value that depends not only on the symbols creating it but also on their number. The symbols that will bring you the smallest amount of cash are the card symbols. The least valuable one is the Ten symbol as it can give you 2, 10 or 25 coins. The card Jack is similar to the Ten symbol, although its maximum reward is 40 coins. The Queen symbol will give you 4, 12 or 50, whereas the King symbol will add 5, 15 or 75 coins to your balance. As far as you can guess, the most valuable symbol in this group is Ace. Its combinations can add 10, 20 or 100 coins to your balance.

The slot’s symbols using the pictures of the cowboy’s essentials are far more valuable. A pair of glasses with spirits will bring you 10, 50 or even 200 coins. A pair of cowboy’s boots creates the combinations that are worth 12, 60 or 300 coins. Undeniably, a real cowboy must have a hat. Yet, the more hats you get on the Dead or Alive slot, the more coins will be added to your balance. Playing this game will give you chances to earn 15, 75 or 400 coins. The risky lifestyle of a cowboy make him taking along a holstered revolver all the time. Yet, having several revolvers at a time is actually more helpful. The combinations created by the symbols of a revolver in its holster are worth 20, 100 and 750 coins. Finally, there is also a symbol of a sheriff’s star that can give you 20, 125 or even 1000 coins.

The Dead or Alive slot also has several bonus features. Some of them are certainly available due to scatter and wild symbols that are described in section on the slot’s bonuses.

The features of Jack and the Dead or Alive

The Dead or Alive video slot is based on 5 reels and nine playlines. We have already mentioned the fact the number of lines can be customised according to your needs and preferences before starting spinning.

We have also mentioned the fact the game has a scatter symbol as well as a wild symbol in the previous chapter. The opportunities these symbols are offering to the slot’s players are discussed in the following section.

The developers of the Net Entertainment company promise you the game has the payout ratio of 96,8%. Note the fact gambling experts recommend this video slot to the players who are ready to make quite a large number of spins during one game. Due to the technical characteristics of this video slot, such a strategy increase your chances of winning huge amount of money. Moreover, the slot is actually a perfect choice for those who wish to play in order to get the greatest prizes rather than earning some extra cash. The Dead or Alive slot is all about risks, yet, the most brave players can count on fantastic rewards.

The wild symbol of the Dead or Alive slot is really wild as it is presented by a wanted poster. Getting such a symbol is particularly useful since it can change any symbol that is not a scatter one into any symbol that you need for completing a current winning combination. Bear in mind the Dead or Alive slot has an extra feature of its wild symbol that is normally unavailable when it comes to other slots. This feature is the ability of the wild symbol to turn into a sticky wild feature which means these symbols will stay on their positions during a following set of spins. Furthermore, sticky wild symbols can turn regular wild symbols into sticky symbols as well.

In addition to these extra possibilities, wild symbols can create combinations that will offer you free spins. Thus, getting five wild symbols will give you five free spins.

We have already told you the Dead or Alive slot has a symbol of a holstered revolver. The life of a cowboy is constantly jeopardised, therefore, one revolver is not enough. The developers of the slot decided to add one more symbol with a picture of two crossed revolvers in order to help you. If you get at least three such symbols, you will be able to make twelve free spins that are using a doubling multiplier, so your winnings will be maximised.  Playing with these free spins can also turn on a respin feature that can be launched only once during a free spin game.

The Dead or Alive video slot offered by NetEnt allows its players to choose from a wide variety of possible sizes of bets. First, the value of one coins used on the game can be set between 0.01 EUR and 0.05 EUR. You can place the maximum number of such coins equal to ten on one playline. Furthermore, the range of possible wagers is between 0.09 EUR and 18 EUR.

The maximum prize that can be gained by playing the Dead or Alive slot is 54000 coins.

Providing you are an enthusiast of the stories about cowboys, you will pleased to know there is an opportunity of visiting The Wild West anytime you wish. Grab your smartphone and launch the game providing your device is using the Android OS or iOS or enjoy the adventure on your desktop computer running the game on Windows.

Pay your attention to the fact the mobile games created by Net Entertainment are particularly sophisticated due to the fact this company is using its advance mobile platform. As a result, the products provided by this game studio including the Dead or Alive slot are running smoothly on virtually any modern portable device.

The Net Entertainment IT company or, as it is also usually referred to, NetEnt is one of the most successful game producers providing online gamblers with its products. If you choose a game developed by NetEnt, you can be sure it will be one of the best products available on the modern market. The games created by the professionals working for this company are featured with fascinating plots, stylish graphics, convenient interface and exclusive bonus features.

This game studio created in 1996 is now a top developer that not only creates the games meeting the highest standards of the market, but also sets the standards for other game providers.

Although there are many fans of the stories about cowboys, it is understandable you might not be one of them. Still, the Dead or Alive slot is not earmarked exclusively to the players who choose the slots only by their topics. Assuming you pay your attention to the possible winnings and the opinions of professional game testers at the first place, there is no way you will neglect this game. The Dead or Alive slot machine is an ideal choice for anyone who is planning to win a large sum of cash during one session.

The Dead or Alive slot is risky. In spite of that fact it is also highly rewarding. Thus, if you are ready to join the adventures of brave cowboys despite all the possible risks, you will certainly get the greatest possible rewards on this slot.