Feel the power of the ancient gods who will help you to win the fantastic jackpot of the legendary Hall of Gods slot! Before you start your adventure, check our list of the top online casinos offering the demo version of the game allowing you to play it for free. 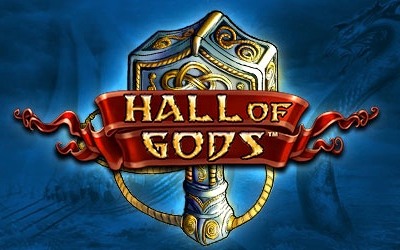 There is hardly any person who believes in the ancient myths today. The era of technology and scientific discoveries has dramatically changed our attitude towards the majority of things living no room for supernatural and fantastic events. Yet, it doesn’t mean we are not interested in magic any more. Many of us are crazy about films, books and games of the fantasy genre. Sophisticated and complex as these stories are, they are especially fascinating due to their deep roots. Apparently, the majority of the stories used in the modern culture are based on the ancient myths.

The globalisation of the world culture allows us to relish not only the world-known myths of ancient Greeks or Egyptians. Today, we also have lots of opportunities to get acquainted with amusing Scandinavian folk tales that are being used in various entertainment and cultural products far more frequently than they used to be. Even the market of online gambling is given us a great variety of games using the theme the adventures of the Scandinavian gods. One of such games is an extremely popular video slot created by NetEnt that is known as The Hall of Gods.

What are you imagining while thinking about the Scandinavian gods? Undeniably, different people might have their unique associations. That is why the fact there are so many games using this theme doesn’t mean all of them are the same. On the contrary, every game provider has one’s own vision of this topic that makes every game available on the market absolutely unique. The NetEnt’s Hall of God slot is definitely exclusive with its advanced graphics and an inimitable style.

Launch the Hall of God slot and you will be immediately captured by a pleasant sound of sea waves hitting gently the walls of an ancient wooden ship. This ship is a beautiful drakkar with a head of a dragon in its front part. Not only does this ship allow you to understand the theme of the game, but also the huge snow slopes on which the developers of the slot have located the buttons. The entire game takes place on the fond decorated with dark-blue colours, whereas the screen of the slot has a gold frame. Certainly, we are also counting on earning some gold by playing this game. Take a more careful look of the fond of the screen and you will notice a beautiful picture presenting a beast attacking a ship with Vikings.

Beyond a shadow of a doubt, a crucial element of the appearance of any video slot machine is the pictures used as symbols. That are the symbols we are observing while playing a slot at the first place being full of hope the next spin will bring a winning combination. The artists of the Net Entertainment game studio paid special attention to the appearance of the slot’s symbols creating beautiful images related to the theme of the game.

A group of the symbols of the lowest value uses the pictures of various objects used by the Scandinavian gods such as a wooden chest that holds magic rejuvenating apples, the hammer belonging to Thor, a stone with a necklace draped upon it as well as an axe.

Certainly, the gods chosen by the developers of the slot for decorating its symbols are more interesting than the objects they are using. Altogether, there are five gods who will help you to gain Norse treasures. You will see two beautiful women among them called Freya and Idun. Although Freya is the goodness of war, she is also the goodness of love, however her love story is rather unfortunate. Since her husband Od was missing and he was never found she was considered to be a widow. The neckless used as a symbol on the Hall of Gods slot is her item. Its magic power is its ability to change anyone wearing it into the most beautiful creature in the world. We recommend you to meet Freya as her tears immediately change into real gold. The magic apples you can also find during the game belong to Idun who is the goodness of youth.

Other gods presented on this game are Tor, Odin and Loki. Tor is the son of the god of wisdom who is commonly known as Odin whereas Loki was a giant who was a constant foe of the highest gods. His favourite ammunition was his axe that is also used as a symbol on the slot while the magic hummer belongs to Tor.

We have already mentioned some aspects of the game’s interface in the previous section of the review. Of course, it is also important to understand the meaning of the buttons located on the screen of the slot.

For setting the amount of money you wish to use while playing The Hall of Gods slot, you can use the Level, Max Bet and Coin Value buttons. The first one allows the players to choose an amount of coins used per line. The value of coins can also be customised. For this purpose, choose the CoinValue button. The Max Bet button launches a special option switching on all of the playlines with the maximum wagers. Playing the game with the greatest possible bets increases your chances of winning a progressive jackpot and, fortunately, there is one earmarked for the players of The Hall of Gods.

In addition to these buttons, the gamer will also be able to turn on the Autoplay mode that will trigger the spins automatically. Providing you are not interested in this option, use a button in the shape of a circle located in the centre of the screen.

In case you have some doubts on the way the slot’s bonus games are looking, you can use the Feature Preview button and it will show you the gameplay of a bonus round. We will also provide you with information on the extra features of the slot in the chapter on the game’s bonuses.

You have already got acquainted with the hosts of The Hall of Gods slot. Yet, you are certainly interested in getting more information on the rewards the gods will give you for your winning combinations.

Not only are the Scandinavian gods ready to share their exclusive items with you, but they will also pay you additional financial rewards. Thus, the maximum prize offered by Idun is 150 coins. Loki will pay you up to a thousand of coins, whereas Freya is ready to give you up to 1500 coins. Tor and his father are the most generous gods of the game offering you 2000 and 4000 coins accordingly. Pay your attention to the second reward since it is unusually high for a video slot.

The features of The Hall of Gods

Perhaps, the most crucial feature of the Hall of Gods video slot is its progressive jackpots. Undeniably, a large group of gamblers prefer playing exclusively this type of slots. Thus, if you are one of them or you are just a player who wish to check the possibilities offered by progressive machines, The Hall of Gods will be a perfect choice for you since it can bring you several millions of euros.

Pay your attention to such features as five reels and twenty playlines of this slot. The developers of this game guarantee you its payout ratio of 95.5%.

The Hall of Gods slot has three symbols that will bring you extra opportunities for winning immense financial prizes. They are a symbol presenting a hammer with the Bonus word, the wild symbol with a picture of a seadragon as well as the scatter symbol with an image of two ravens. Both the wild symbol and scatter one have the wild and scatter words written on them, so you will certainly not make a mistake during a game.

The game’s wild symbol will change all the symbols except for the symbols of scatter and a bonus into further wild symbols that are located in the same vertical line. The only condition for turning this bonus feature on is getting the first bonus symbol on the second, third or fourth reel.

The slot’s scatter symbol will launch a round of free spins. In addition to that, you will be able to play the game with a multiplier making your potential winnings thrice greater than the winnings you would otherwise gain via a regular game mode.

Although the bonus features of the game we have just mentioned are extremely profitable, any player of The Hall of Gods is chasing the Bonus symbol at the first place. That is because this symbol is your key to a round of bonus games that can bring you one of three progressive jackpots.

Some of the slot’s limits have already been discussed. Thus, so far, you have been informed about the number of the game’s reels and lines that are five and twenty respectively. Furthermore, we have already mentioned the payout ratio of the slot that is equal to 95.5%. Yet, you should still learn your betting opportunities.

The game offers you five bet levels. The value of one coin can be chosen from a range starting with 0.01 EUR and ending with 0.50 EUR. The total value of one bet made on the Hall of Gods video slot per one spin is 0.20 EUR whereas the maximum one is 50.00 EUR.

The Hall of Gods is one of the favourite games of the ambitious gamblers trying to hit a progressive jackpot. Since this game is chosen at various online casinos on so frequent occasions, the developers of Net Entertainment have made their best to allow you to enjoy this game not only on your desktop computer but also on various portable devices such as smartphones and computer tablets running on the Android OS as well as iOS.

The Hall of Gods is one of the most outstanding games created by the NetEnt IT company specialising in the branch of online gambling. This game studio has quite deep roots being established in 1996. As the company has spent more than twenty years on the market it has gained sufficient experience and mastery that allow its specialists to create absolutely unparalleled products. The collection of games offered by this company is not limited exclusively to video slots since Net Entertainment has also developed a large variety of card and table games of the highest quality.

The Hall of the Gods is not an ordinary video slot. First of all, its plot is based on beautiful and fascinating stories about the Norse myths. The most talented artists of Net Entertainment have created wonderful pictures for this game that are real masterpieces. Furthermore, the game is full of bonuses that are can be earned quit often according to the statistics collected by professional game testers.

Of course, the main advantage of The Hall of Gods slot is its set of three progressive jackpots that can bring you real treasures. Thus, it’s time to worship the Scandinavian gods and visit The Hall of Gods!