Check how amazing the legendary Starburst slot machine is! You do not need to pay your money for playing the game, just pick one of the casinos on our list and start a game with the demo version entirely for free. When you are ready, make your bet and grab a winning! 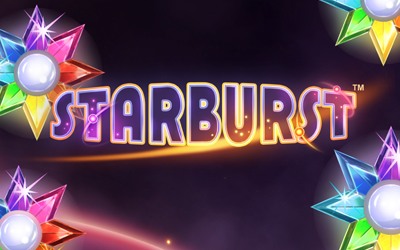 If you visit the lobbies of the top online casinos, you will see Starburst is one of the most popular video slots on the Internet. This famous money game is one of the best products of the Net Entertainment game studio that is known for its gambling software of the highest quality. This article will help you to understand the way the Starburst slot machine is operating and what advantages of playing it you can be benefit from.

It might be a bit complicated to understand the exact theme of the Starburst slot at the very beginning since the screen of your electronic device will be filled with an abundance of beautiful and dazzling stones. Undeniably, they give the first impression of sheer delight to any new player.

In point of fact, the theme of the Starburst slot machine isn’t especially complex and resembles the online video slots of the first generation. That is why you might find this game under the category of the classic slots at some Internet casinos. Still, this fact doesn’t make the game less exciting, otherwise it wouldn’t have so many devotees around the world. Like other products developed by NetEnt, Starburst is featured with advanced graphics. The Starburst slot machine creates combinations of beautiful symbols that are mesmerising colourful crystals. You will see five types of splendid crystals of violet, blue, red, green and yellow colours as well as a brilliant star of all the colours of a rainbow. The star is the wild symbol of the Starburst slot. Apart from these images, you will also meet the red number seven painted on a fond of a blue planet and the word BAR painted on the fond of a golden planet. 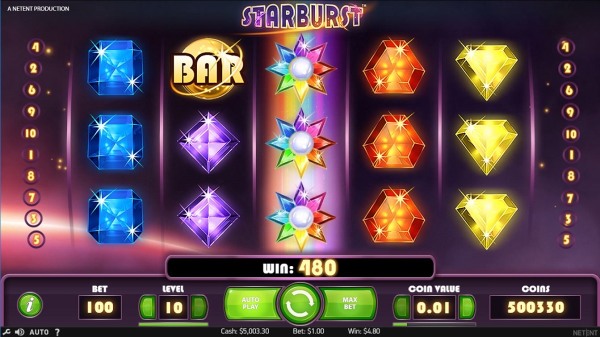 The game is running smoothly, while soft and beautiful sounds help you to immerse into a life-changing adventure that takes place in the outer space. The ideal combination of attractive appearance and pleasant music of the game will create a good impression even in the most experienced and demanding players.

The way the StarBurst video slot is designed is quite similar to other products developed by the NetEnt game studio. First of all, it becomes obvious when you look at the way the buttons are located on the screen. Net Entertainment always makes sure its video slots are convenient and intuitive even for the users who can’t boast about advance computer skills. Thus, the main button launching spins is located in the center of the screen. The button used for setting your bets to the maximum size is located to the left hand side of the main button, whereas the button turning the autoplay mode is located to the left hand side of the main button. In addition to it, all of the functional and control buttons of the StarBurst slot are made in a green colour with a view to allowing the players to find them quickly without any disruption from the game process.

The support section of the game is also of the highest quality as it always is on the games developed by Net Entertainment. The company’s staff has created an informative table including all the payouts of the slot’s playlines as well as all of the winning combinations that will bring you money. Due to this table and the game’s organisation, absolutely any novice will easily understand its rules and start playing the slot.

You will certainly find Starburst simple to play. The game has five reels and ten playlines and the players can use an option of choosing the amount of lines used for playing the game as well as the size of a bet. Providing you are ready to play with the highest possible wagers, there is an option for turning the maximum bet that has already been mentioned in this section. Thus, an entire process of playing the slot is extremely simple and particularly rewarding due to the two bonus games that are described in the section on the slot’s bonuses. 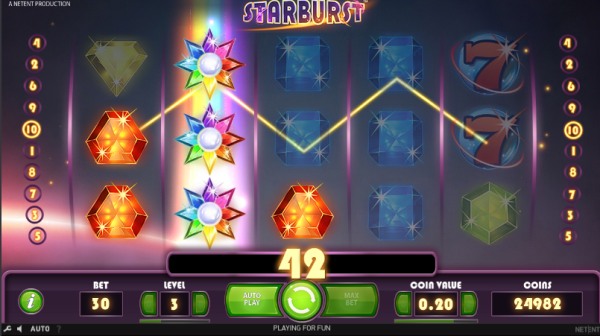 One of the major feature of the Starburst video slot is the possibility of winning great amounts of cash while having a great time playing a fascinating video slot. As we have already mentioned, the game allows the players to change the size of a bet or even turn the greatest bet on, choose the amount of lines or turn the autoplay mode on.

The Satrburst slot like many others developed by NetEnt has the Skill Stop option that makes it possible for the players to stop the spinning of the slot manually. Despite the fact it is a random number generator that determines the outcome of the game, many players enjoy using this option.

NetEnt has added two bonus levels to the Starburst slot with a view to making this game particularly profitable for any lucky player who manages to launch them.

In order to enter the first bonus games called Starburst’s Wilds, you will need to get a combination of the stars that are the game’s wild symbols to get to the three middle reels. This will entitle you to using a bonus of a re-spin. Furthermore, there is a possibility of getting up to five re-spins during this bonus level.

Another Starburst’s bonus game is known as The Win Both Ways. In other words, this is a mode that turn on a unique feature of the slot that will give you a prize for getting a winning combination regardless of its sequence. It means the combination may appear right-to-left or left-to-right and you will still get your reward. 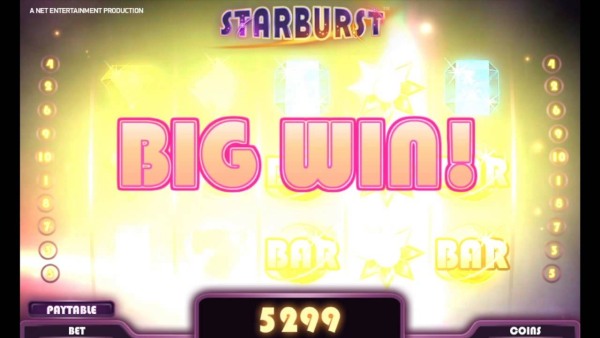 The Starburst video slot offers ten levels of betting that are available regardless of the chosen coin value. Meanwhile, the values of the coins are available in a range between 0.01 and 1.00. You are allowed to make a minimum wager of 0.10 per spin as well as the highest stake equal to 100.00.

Pay your attention to the fact the game actually plays twenty paylines, although officially it has only ten lines. It is possible because of the slot’s feature of paying the winnings even in the case of receiving a reverse sequence of the winning symbols. Just like in The Win Both Ways, you can get a reward for getting a winning combination in the both right-to-left position and left-to-right position.

The Starburst video slot machine is one of the NetEnt’s games available on the company’s mobile platform which makes it accessible to both the users of desktop computers and the majority of mobile devices running on the major operating systems such as Android and iOS. 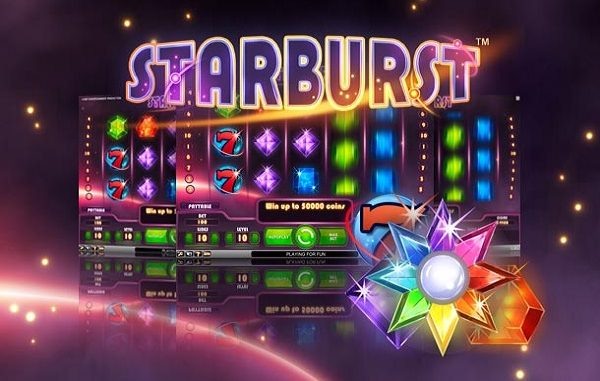 Net Entertainment is one of the most successful game studios that has already been on the market more than twenty years. A long experience in the branch of online gambling allows the professional team of the company to please the myriads of its fans with the frequent releases with new casino games of the highest quality.

Starburst is an ideal choice for anyone who wishes to escape from the everyday routine and feel a great zeal that can actually bring you huge winnings. Moreover, Starburst is an ideal choice for any person who is just starting to delve into the magic world of online casino games because of its simplicity and a flexible betting system that makes the slot particularly affordable for any player.

We can continue our description of the Starburst video slot machine, yet, we believe it is time to check this game on your own!