No matter whether you are a fan of classic fruit machines or you enjoy playing video slot featured with sophisticated graphics, especially the ones with “tasty” images, the Berryburst online slot released by NetEnt in 2018 will be an ideal choice for you. You can try playing this game completely free of charge via a demonstrative mode on our website before you start gambling with real cash. 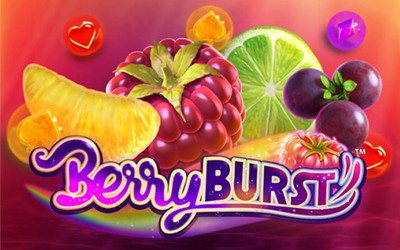 The features of Berryburst

Berryburst is one of the slots of NetEnt based on the Cluster Pays technology which doesn’t use paylines. Instead of this traditional system, the game counts the winnings according to the clusters created by at least five symbols of the same type.

The developers of the slot have created this game in such a way as to allow the players to make absolutely different bets starting from €0,10 and ending with €200.

As we have already mentioned, Berryburst is a “tasty” game since it is using images of delicious fruits. Here, you will get a real cocktail of limes, grapes, mandarins and raspberries! The greatest clusters made of 15 limes or grapes will give you up to 2500 coins, 15 mandarins can bring you up to 3000 coins whereas 15 raspberries offer the greatest possible winning of 5000 coins.

There is also a group of low-paying symbols including diamonds, hearts and spades designed according to the overall bright and colourful graphics style of the slot. They will pay you up to a thousand of coins.

The bonus of Berryburst 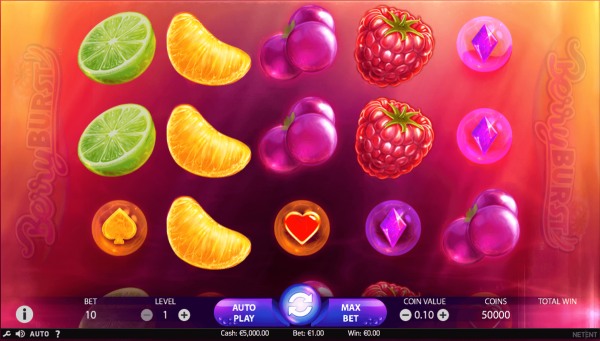 The wild symbols of Berryburst is presented by an image of a letter W frozen inside an ice cube. It has a special feature of an ability of covering several positions at a time. This feature is called Wild Expansion and it gives the players extra spins. You will be able to get an entire screen filled with wilds which will give you an x1000 multiplier.

How to play Berryburst slot

As you can see, the gameplay of Berryburst is somewhat different from standard online slots due to its Cluster Pays technology. Thus, the aim of the game is collecting clusters of at least five same symbols instead of a pay line including a minimum amount of three symbols. Still, it doesn’t mean you will need to do anything special while playing. As usually, you will need to make your spins choosing the coin value and the bet level beforehand.

Berryburst slot is a particularly pleasant online game which will help you to relax and grab massive winnings. The attractive design of the slot combined with wonderful soft music will give you great time while you are playing and encourage you to win even more money.