Creature from the Black Lagoon Slot

If you enjoy the classic horror stories created by the Universal film producer, you have certainly heard about its first masterpiece of this genre titled as Creature from the Black Lagoon. This is one of the most well-known stories about strange beasts and curious scientists trying to find them. The NetEnt game studio is now offering its video slot dedicated to this popular film which is available on our website for free play with a demonstrative mode. 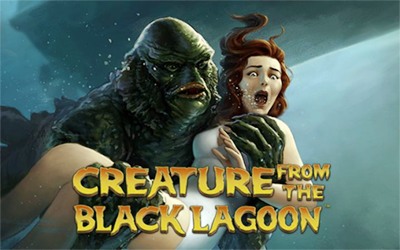 The features of Creature from the Black Lagoon

As far as you can guess, Creature from the Black Lagoon was created according to the style of the film. The entire playing process is taking place in the Black Lagoon where a group of the scientist comes to find and learn more about a mysterious reptilian creature called Gillman. Thus, the greatest winnings of the slot can be collected with the combinations made of the symbols with the participants of the expedition. The symbols with Lucas will give you up to 400 coins, the symbols with Carl are worth up to 500 coins whereas getting five pictures of David will add 600 coins to your balance. The most valuable symbol is the one with the girl stolen by Gillman. If you find five symbols of her, you will get 750 coins.

In order to be more effective while searching for the girl, you will be able to use the equipment of the scientists. The object you can use are a knife and a camera paying up to 100 coins as well as a scuba set and binoculars offering up to 125 coins.

Note the fact that you will have to meet and get engaged in fierce combat with Gillman in a bonus round of the game. The entire structure of the slot includes five reels and twenty active paylines.

The bonus of Creature from the Black Lagoon 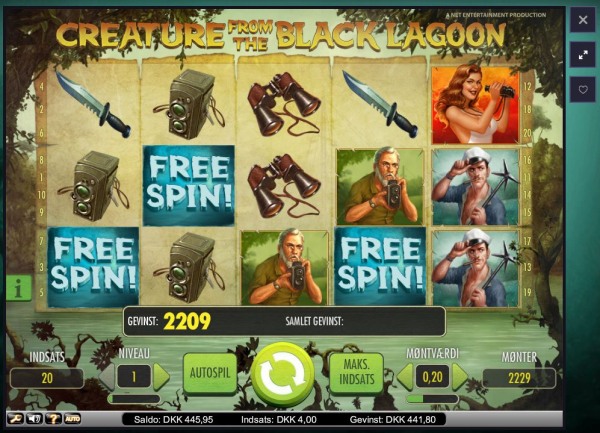 The Creature of the Black Lagoon slot machine offers its players both a Wild symbol and a Scatter symbol. Although these special symbols are acting like the wilds and scatters of many other slots, this time, Scatter has a unique function as well. Collecting at least there of such symbols launches a bonus level of the game which will transfer you underwater. There, you will meet Gillman and try to kill him. The success of this battle depends on the number of shooting targets which are additional symbols occurring on the fifth reel. The more shooting targets you get, the more efficient you are since these targets will launch even more free spins and add extended wild symbols on the screen.

The Health bar of the beast will lose its Health points and you will save the girl getting the greatest possible reward of this slot.

How to play Creature from the Black Lagoon slot

In the previous section of the review, you have learnt about the bonus level of the Creature of the Black Lagoon game. Although this round stimulates a real battle between you and the beast, you won’t need to do anything special even during this bonus game. You will simply need to make your bets and push the Spin button. All the results of the game will be generated randomly.

No matter, whether you are a devotee of classic horror films or a fan of the slot machines offered by NetEnt, as this game will be a perfect choice for anyone. The interesting design of the slot combined with a rewarding bonus level will give you a boost of positive energy and attractive winnings.