Hungry for brand-new games with untypical appearance and gameplay? Try playing the Fruit Wrap slot which can be played not only with real cash but also absolutely for free. Check one of the top online casinos on our list and try the demo version of this game. 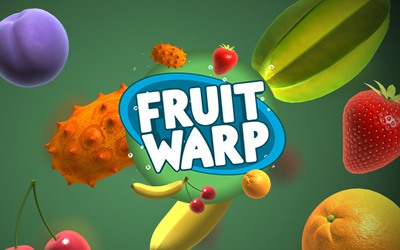 Do you really believe the fruits wondering around the screens of video slots are out-of-date and the majority of casino enthusiasts have finally become bored by this typical slot machine design? Then, you will be surprised to learn how many players are desperate to eat even more fruits and, certainly, the modern game studios are doing everything in order to live up to the expectations of their clients.

The Thunderkick game operator used its Fruit Warp slot in order to show the great talent of its designers who created an absolutely innovative product on the foundations of the classic slot genre. Believe us we are not exaggerating while using such words about this colourful fruit machine. Make your first spin and you will be utterly amazed!

So, what is so extraordinary that you will find on the screen of your device while playing the Thunderkick’s Fruit Warp slot machine? You’d better ask what you won’t find since this unusual slot game have neither reels nor playlines! Although there is a actually a number of less typical games that also do not use playilines, the resignation from the use of reels is the result of the most creative approach used by the designers of Fruit Warp. The entire game is taking place in a fruit cocktail full of sweet juice. We are sure you won’t neglect a possibility of tasting this cocktail!

So, as we have just said the screen of the slot is full of fruit juice and the fruits such as cherries, strawberries, bananas, kiwis, papayas, plums, mangos, vine grapes, oranges and dragon fruits are slowly swimming in it creating the combinations that will add real money to your player’s account. The artists working for the Thunderkick game studio decided to create 3D slot symbols with a view to making them look more realistic. That is why you will not only wish to touch them, but it will certainly be extremely tempting to eat them! Looking at these delicious things while listening to relaxing and exotic soundtracks will be the best opportunity for having a rest after a long and busy day.

Before looking closer at the details of the slot’s gameplay, you should understand its interface. On the one hand, Thunderkick created a convenient slot that is easy to navigate even for the people who do not feel especially confident when it comes to working with computers. On the other hand, the slot has several unique features that can be hardly found anywhere else on the gambling market.

For instance, the location of the Start button is quite traditional as it can be found in the right side section of buttons. At the same time, you will be able to stop spinning the machines by pressing the Start button during the game process. This will make the fruits stop moving and you will find them silent in their latest position.

The designers of the Fruit Warp video slot also created a possibility of playing the game with the autoplay mode. This mode will start spins automatically, yet, the amount of spins you would like to play must be chosen beforehand. Note you will be able to stop the work of the automatic mode of the slot any time you need it.

In case you need any assistance on the playing process, you can refer to the related material that can be reached by pressing the button located on the screen of the slot.

Certainly, it is crucial to understand the way the winning combinations are created on this slot especially Fruit Warp is so different from other slot games. Since this machine doesn’t have any playlines, your financial prize will be contingent on the amount of equal symbols that can be located in absolutely different positions on the screen and still be considered as a part of a winning combination. Every spin of Fruit Warp will trigger the occurrence of nine symbols. Therefore, the greatest possible prize is earmarked for a combination of nine equal symbols. The minimum amount of equal symbols needed for creating a winning combination is three. Like in the case of other slots, the value of each symbol available on Fruit Warp is different.

The least valuable fruits on the Fruit Warp slot are very tasty, yet, they won’t bring you too much cash since you can find them virtually in any garden. These are cherries, plums and strawberries. The minimum amount of cash they can bring you is ten coins, whereas the maximum prize available when nine equal symbols are collected is 2400 coins.

The next group of symbols is presented by more exotic fruits than the previous ones. Still, these fruits are widespread due to the global transportation system, and, as a result, they will give you moderate profits. These fruits are oranges, bananas and grapes. The minimum prize these symbols will give you is twenty coins, while the greatest one is 3600 coins.

Finally, the Fruit Warp video slot will offer you such exotic fruits as kiwis, mangos and papayas as the most valuable treats. When they occur on the screen, you will gain at least forty coins. Still, the greatest reward gained with the help of these fruits is x21600.

The features of Fruit Warp

We have already discussed some of the features of the Fruit Warp video slot. This game created by the Thunderkick game studio combines absolutely unique features such as having no playlines or reels with a traditional theme of classic video slot machines. The fact this differs so much from other games doesn’t mean it isn’t rewarding enough. On the contrary, Fruit Warp offers its players a particularly high payout percentage of 97%. In addition to it, the slot is featured with a relatively strong possibility of winning, especially, when it is compared to other games.

The Fruit Warp slot is also featured with exclusive bonus options that are discussed in the next chapter of the review.

You have probably already guessed such an untypical video slot a Fruit Warp doesn’t have scatter or wild symbols. Although it is actually the truth, and these special symbols haven’t been included into the game, you shouldn’t think the game is less rewarding than other slots. Fruit Warp has its own unique bonus features that differ from the ones we are used to, albeit this fact doesn’t make them less rewarding.

One of the most profitable bonuses offered by the Fruit Warp slot is an extra game that can be launched by collecting at least four fruits of the same type. The bonus feature of the game turned on by such a combination is a so-called fruit teleport. What this teleport does is making absolutely new portion of fruits come instead of each fruit that is different from the symbols creating the current winning combination. Just imagine how many extra winning fruits you can get with the help of this option!

In point of fact, the bonus game we have just mentioned is the beginning of extra bounties offered by Fruit Warp. In case you collect five symbols of the same type, the slot will add a special fruit scale called Warp Meter by the developers. This will start an exclusive game which will have your previous winning combination all the time. Other symbols will change giving you more and more extra fruits for your combination. Once you manage to get at least one extra symbol of the type of your winning symbols, the fruit teleportation will be launched again. The more symbols are added to your winning combination, the higher is your level on the Warp Meter scale. And, it is highly beneficial to reach higher levels, as it will bring you even more bonuses such as free spins, fruit teleportation, greater winnings and many more!

It has already been mentioned that Fruit Warp offers the greatest winning of a multiplier of x21600 for collecting the maximum possible amount of the most valuable symbols. The number of coins you choose for this multiplier can be of a great variety. The preset amount of coins on this slot is 0.10 coins, yet, you can choose even a hundred of coins for your wagers. Since there are no playlines on this game, your wagers are earmarked for the entire playing process. This means, you will pay for your bet exactly the amount of cash you choose for your stake.

The Thunderkick’s Fruit Warp video slot is a game perfectly suitable for playing on various types of devices including desktop and tablet computers as well as smartphones. If you are using one of popular operating systems available for these appliances, such as Android, iOS or Windows, Fruit Warp will certainly run smoothly on your machine.

Although the Thunderkick game studio established in 2012 in Sweden is quite young, it doesn’t mean the quality of the company’s products are not sophisticated enough for an experienced gambler. The team of Thunderkick constist of extremely talented designers and artists who enjoy creativity in their work. These experts perfectly understand the market of money games and know how to amuse their players.

Beyond a shadow of a doubt, the companies that have already spent more than thirty years in the business, have far more games in their offers. Still, it also means there are lot’s of games that are already out-of-date in their collections, whereas choosing one of Thunderkick’s online casinos guarantees you will get an access exclusively to the most cutting-edge programmes.

On the one hand, the Fruit Warp slot is extremely simple as its theme is totally mainstream and the design is plane and minimalistic. On the other hand, this video slot was creating with the use of an absolutely innovative approach resulting in an exceptional product that differs a lot from other slot machines. In addition to it, the game is full of unique bonuses that can increase the slot’s multipliers up to enormous values and give an abundance of free spins.

Despite the fact the Fruit Warp theme is so popular, the fruits offered by this slot are particularly realistic due to the advanced 3D graphics. Moreover, the fact the appearance of the slot won’t raise any special aesthetic feeling in you, is actually a huge advantage of the game as it is intuitive and transparent.